Thanks to everyone who took the time to e-mail support of the bill to the legislators.
Posted by Scot Chipman at 11:00 PM No comments:

Dear Legislator,
I am writing to support S.B. 84. I feel the proposed amendments to the state boating laws with enhance the the sport of water skiing in the state while aiding competition skiing practice and providing opportunities to use the latest equipment designed for safety and better performance while participating in the sport of water skiing.
Thank you for voting yes and passing S.B. 84.
Sincerely,
Posted by Utah Water Ski Club at 10:31 AM 1 comment:

Thanks to all of those who sent in their support of the bill.

Posted by Scot Chipman at 5:53 PM No comments:

Hi Everyone,
I just wanted to give all the members an update on one of our sponsors, Custom Covers.  For those of you who didn't attend the club meeting last Thursday at the Boat Show, I posted a recap of what happened at the meeting.  So I don't want to repeat myself in this email.  In a nutshell, Randy Park of Parks Sportsman came and presented at our meeting Thursday.  He told us about Parks Sportsman and how he wants to be a major player and provider of watersports equipment the club members.  He had a lot of great ideas and plans.  He was also very fun and entertaining.  Go to the website and read up on all he had to say and offer.
Also at our meeting was Justin Jones, owner of Custom Covers in Salt Lake.  He's not a member of the club but he attended our meeting when he saw the notice on Facebook.  Yesterday, Saturday, I was back up at the boat show.  Justin saw me and called me over to talk.  He told me that Randy Park at our meeting really motivated him and he wants to "step up to the plate" like Randy did.  So he is changing the club's discount that he has been offering us.  In the past, and on our membership card, Justin has offered us 5% discount on all his products and 20% discount during the off-season.  But starting now Justin will give all club members and waitlist members 25% all year round!  And during the off-season he will do even better than that.  You'll just need to talk to him.
If you are not familar with Justin, Custom Covers makes in my opinion the best bimini top in the industry.  For more info on Custom Covers go to www.sewlong.com.
Those of you on the waitlist, these discounts apply to you as well.
Just thought I would let you guys know.
Garn Arnold
Posted by Utah Water Ski Club at 9:37 PM No comments:

Last Thursday, February 8th, was our annual club Boat Show meeting.  We had a good turnout with approximately 30 to 40 members and their families attending.  The meeting was catered so we had good food to go along with the meeting.  The food alone makes the meeting worth attending.  And then those who attended were able to get into the Boat Show for no charge.


Those of you who didn't attend really missed out.  Particularly this year because those who attended also received a $25.00 gift certificate to Parks Sportsman in Orem.  But the best part of the meeting was being able to visit with all the different members of the club.  We really have a good group of people and I'm grateful for the new friendships that I have been able to make since being a member of the club.

Last Summer I was contacted by Randy Park of Parks Sportsman in Orem.  He was really interested in supporting and getting involved with the Utah Waterski Club.  So this year we decided to bring Randy to the club meeting and have him present some of these ideas to the members.  It went over extremely well.  Randy was very open, positive, motivating, and fun.

He also has a lot of great ideas.  In June, Parks is going to have a demo day at course 1 where we can try out all the different skis.  He would also like to see if he can bring in a pro skier at the demo day for a clinic just for the club members.  He also talked about having a special Waterski Club night at the store where he would give extra discounts to the club members.  And as mentioned above, Randy gave everyone a $25.00 gift card to be used for anything in the store.  No strings attached.

As club members, Randy is giving us 25% off of anything in the watersports department, and at least 10% off of anything else in the store.  They will not be undersold by anyone.  Randy also told us that if we would like to demo a ski than he will wave the demo fee to club members.  They carry both HO and Radar skis so take advantage of that.  The bottom line is Randy is willing to support us as much as we are willing to support him. Just go in and ask for Randy or Cory and they will take care of you.

Parks Sportsman is really laying out the welcome mat for us.  They want to be a big player in Utah water skiing and a provider for the members of our club.  If we want these type of benefits to continue, then we need to give our supporters our business.  For a more detailed post on Parks Sportsman and everything they have to offer, look at my past posts where I gave a detailed description of the store.  Parks Sportsman in located in North Orem at 644 North State Street.  Their number is 801-225-0227.

Another benefit of having Randy Park come to our meeting was it movtivated another one of our club supporters to increase their benefits to us.  Justin Jones, owner of Custom Covers in Salt Lake, also attended our club meeting.  Afterwards Justin caught up with me and told me that he was so motivated by Randy's presentation that he would like to increase his benefits to the members of the club.  In the past, Justin, who makes the best quality tops and covers in the industry in my opinion, has been offering club members a 5% discount on his products during the regular season, and a 20% discount during the off season.  Well now, Justin will give members of the club a 25% discount all year on all his products.  And in the off-season he will do even better than that.

Let me say this about Justin and Custom Covers.  Last Fall, after my original bimini top disintegrated when I was down at Lake Mead, Justin made a new fold-out bimini top for me as well as a snap-on cover for my open bow.  The difference in quality between my original bimini and my new one from Justin is night and day.  You can't even compare the two.  The new one is so much stronger, easier to use, and way better looking.  I honestly don't think there's a better bimini out there than what Justin makes.  So take advantage of it.

This coming year the board will have a new look with some different faces on it.  A few different members stated their desire to be on the board so some of the current ones will be stepping down. I'm not sure yet what all the changes will be.  But we will let you know as soon as it happens.

See you on the lake! 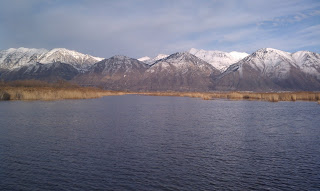 Keith Morgan, John Lohner, Tim Peterson, Scot Chipman, and Mark Chilcut all skied course #1 on Utah Lake today. It seems that this is the earliest anyone has ever skied buoys on Utah Lake, possibly in the entire state.
Posted by Utah Water Ski Club at 4:53 PM No comments:

The clubs annual meeting/activity is February 9th at 6:00 pm in room 200C of the South Town Expo Center. All club members will be given free entrance into the boat show after the short meeting that will be over by 7:00 pm at the latest, a light meal will be served starting at 6:00 pm. If you would like to go into the boat show before the meeting go to the information desk and give them your name for a ticket, the information desk will have the club member list to verify your membership with a valid ID card.

The main reason for the annual meeting is to elect a new board, the board desperately needs new people. If you want to be on the board in 2012 e-mail scotchipman@gmail.com and/or speak up at the meeting. The UWSC board only meets four times a year and does not pay dues.

All members are encourage to pay their membership dues of $125 ($25 for emeritus members) at the annual meeting so that we can give you your membership card rather than mailing it out, click here to download the application and release from. Membership cards are good for various discounts at local retailers. A reminder that it is required that all club members are ACTIVE USA Water Ski members. If you need to renew your USA Water Ski membership you can do it on-line now at http://www.usawaterski.org/pages/Join.html

Posted by Utah Water Ski Club at 6:00 PM No comments:

Email ThisBlogThis!Share to TwitterShare to FacebookShare to Pinterest
Newer Posts Older Posts Home
Subscribe to: Posts (Atom)
The Utah Water Ski Club is a non profit USA Water Ski affiliated club that was established in 1976. The clubs interest is in promoting the sport of water skiing in Utah, particularly slalom skiing. We hope this web site proves to be useful to current members of the club and those wishing to join the club. For more information about the club including how to join please visit our guests/wait list page above.