The Adopt-A-Park Service Project at Provo Harbor was a great success.  We had 27 club members and some family members who came out and supported the activity.  You wouldn't think that picking up trash, filling sandbags, and cleaning up the grassy area would be what you would refer to as "fun".  But it was.  Being able to socialize with the other club members, many of whom I only see this one time of the year, was very fun and enjoyable.  So a big thank you to the club members who attended the project.  With 60 members in the club, 27 is less than half the membership.  Let's see if next time we can have over 50% show up.  The next Adopt-a-Park service project will be on September 17.

We started the morning off with cleaning up the trash around the park.  With all of us sweeping through the park we got that done rather quickly.  From there we moved to filling sand bags.  We filled up all the bags they had but with all the flooding going on at the park I'm sure they could have used more.  Once we filled the bags we then started cleaning up the grassy areas on the South side of the harbor.  With all the flooding that has taken place there were many weeds and logs washed up around the shoreline.  We raked these into piles making it easier for the Park Service to pick them up.   A word of warning to you members, while cleaning up these reeds we watched a number of HUGE logs floating down Provo River into the lake.  So take caution when driving your boat out on the lake and keep and eye out for some big logs.  You hit one of those and you will be in serious trouble.

Once we were done with the work we had a killer lunch catered by Goodwood Barbeque!  That alone made attending the service project worthwhile.  Good friends, good food, and a needed worthwhile service project - it doesn't get much better than that.

As I mentioned earlier, there is flooding going on at Provo Harbor.  I wasn't aware of it until I got there and I was very surprised with just how high the water level is.  The lake is so high that the entire South end of the park has been closed off due to flooding.  Many of the picnic and grassy areas are underwater.  At one point water completely covers the road where the dike begins making the lake and the harbor one solid body of water. And this is before the mountain melt and runoff has even began.  So before things get better they are probably going to get worse.  So for now you can only launch your boat using the North launch ramp. 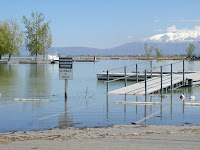 Posted by Utah Water Ski Club at 2:48 PM No comments:

The semiannual (third Saturday in May/Sept) Utah Water Ski Club Adopt-a-Park service project/activity will be held Saturday May 21st from 10 am to noon, lunch from Goodwood BBQ at noon. This year in addition to picking up trash we will be cleaning up all of the piles of reeds that have come into the park due to the high water this year. Please bring shovels and rakes for you and others if you have extra. All club members are now required to attend at least one Adopt-a-Park service project/activity every two years or go down to Utah Lake State Park on your own, sign in, and ask what you an do to help out.
Thanks
UWSC Board
Posted by Utah Water Ski Club at 7:59 AM No comments:

Email ThisBlogThis!Share to TwitterShare to FacebookShare to Pinterest
Newer Posts Older Posts Home
Subscribe to: Posts (Atom)
The Utah Water Ski Club is a non profit USA Water Ski affiliated club that was established in 1976. The clubs interest is in promoting the sport of water skiing in Utah, particularly slalom skiing. We hope this web site proves to be useful to current members of the club and those wishing to join the club. For more information about the club including how to join please visit our guests/wait list page above.