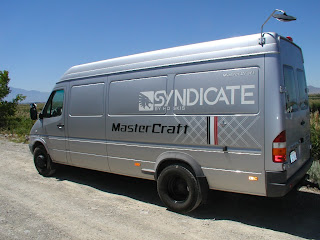 Utah Waterski Club was privileged to have Marcus Brown's Face To Face Tour roll into town this past June 17th and 18th for two chuck full days of clinics and skiing.  Course One at Utah Lake was the site of Marcus's first tour stop in Utah.  All I can say is "WOW!!"  If you missed this clinic, you really missed out.  Not only is Marcus Brown one of the best skiers in the world, he's also one of the best coaches in the world as well.  Out of all the clinics that I have attended, this one stands head and shoulders above them all.  Hopefully we can get Marcus back for another tour stop.  Everybody who attended the clinic couldn't say enough about Marcus, Jenny, and the quality of his coaching.  It was definitely money well spent. 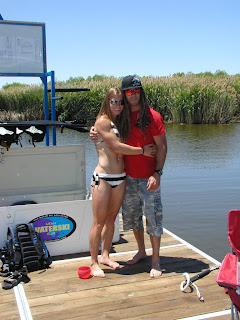 The clinic was ran in three sessions with three groups of five skiers.  Each skier in each group skied two sets.  The first group was on Thursday.  The second group skied Friday morning with the third group skiing Friday afternoon.  Marcus's partner and girlfriend, Jenny Labaw - a fitness expert and personal trainer (http://www.afitplace.com/) - started each session off with a series of ballistic stretches and exercises oriented specifically for the slalom skier.  Jenny was incredibly knowledgeable and helpful in teaching us how to warm up and prevent injuries while skiing.  It was very informative and worthwhile.  She's also the fittest female I have ever seen in my life.
The one-on-one instruction by Marcus was nothing short of world class.  Marcus has an uncanny ability to relate to any level of skier.  He was so friendly and down to Earth that the nervousness of skiing with Marcus Brown quickly disappeared and you felt like you were skiing with a friend.  What impressed me the most was his ability to communicate what he saw and what he wanted you to do in a way that you completely understood what he was asking of you.  All you had to do was go out and do it - sometimes easier said than done. 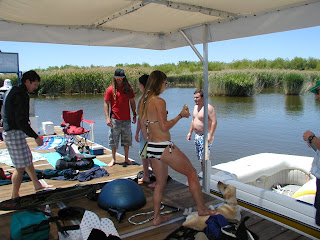 One of the highlights of the day was watching Marcus Brown take a set of his own.  I was lucky enough to be able to ride in the boat when Marcus skied.  I was blown away!  The way he maintained his speed throughout the course, the angle he created coming out of the turn,  the power and fluidity of his movements, and the pure poetry of his motions was nothing short of spectacular.  It was something that I personally have only been able to witness just a few times in my life. 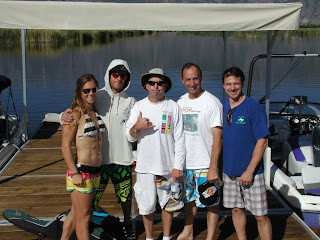 I would like to thank Marcus and Jenny for taking the time to stop by our neighborhood.  Everyone who attended went home with renewed determination, specific things to work on, and a big smile on their face. I would also like to thank Mark Chilcutt for setting this clinic up and making it happen.  I would also like to thank all those who attended.  What makes our club such a great club is the friendship and comradery amongst the members.  Everyone who was there made it a very memorable day. 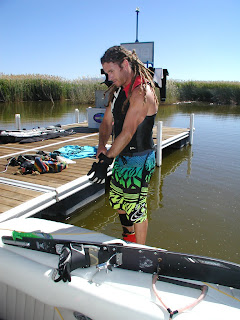 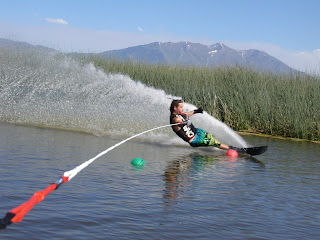 Newer Post Older Post Home
Subscribe to: Post Comments (Atom)
The Utah Water Ski Club is a non profit USA Water Ski affiliated club that was established in 1976. The clubs interest is in promoting the sport of water skiing in Utah, particularly slalom skiing. We hope this web site proves to be useful to current members of the club and those wishing to join the club. For more information about the club including how to join please visit our guests/wait list page above.